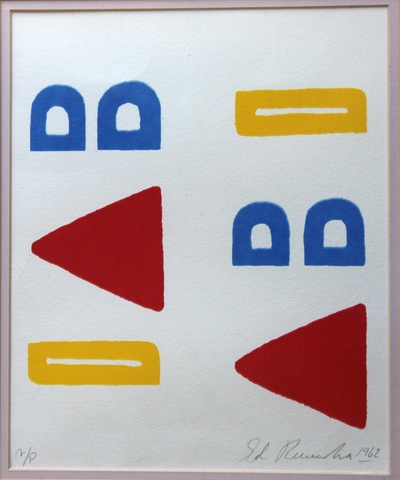 The other day I received a request for help from a gentleman who lives near Boston, MA, who is looking for some help to authenticate the 9"x11" color print shown above that he believes is the work of legendary artist Ed Ruscha. He had read my recent article about the artist moving from his studio in Venice to one in Culver City, and he was hoping someone might be able and willing to help him contact the man about this print. Here's the request:

Allow me to introduce myself and explain my "cry for help", if you will. I live in Massachusetts and I am a big fan of the pop-art movement. Recently I was able to acquire a small, 9"x11" color print that was signed, in pencil, apparently in 1962, by Edward Ruscha himself. For those of you who don't know, Ed Ruscha together with Andy Warhol, Roy Lichtenstein and others is one of the founding fathers of pop-art that got its "official" start in 1962.

Typically their original works are way out of my price league, so I was excited to obtain a print with his signature that I could actually afford. Very cool. But: too good to be true? Well, may be, may be not. The problem is that nobody (menaing a couple of art dealers) that I asked knows anything about this print, because it is not in his list of known works (the "catalogue raisonne"). By default then it is considered not genuine by the experts, although it remains strange, if indeed it is a fake, that the forgery is a print of Ruscha that nobody knows instead of one that people do know, and pay good money for. So that doesn't make much sense if your goal is to sell a fraudulent Ruscha. But if it is genuine, why is it not known to the art world? Moreover, in pencil underneath it also says "a/p" for "artist proof" indicating a series of prints have been made from this image that nobody knows about. So that doesn't make much sense either.

So this brings me to the following request to you readers. The simplest solution to crack this little art mystery, in my mind, is to simply ask Ed Ruscha if he recognizes this print. Even if he didn't, I think he may like to know which ones are put out there as fakes with his forged signature. I know that Ed Ruscha recently moved his studio from LA to Culver City, but I do not know where exactly.  I am reaching out to you to help me find out his contact address and/or email so I can ask him about the authenticity, or lack thereof, of this color print by sending him a picture. If you have this information, please email me directly at: tris_base@yahoo.com or contact Justin Scupine at the Culver City Times who will then forward it to me. I can assure you that I will keep this info strictly to myself; I am not here to be a nuisance to Mr. Ruscha after he gives me his input. Thanks to all of you for taking the time to read this, and help me solve this puzzle!