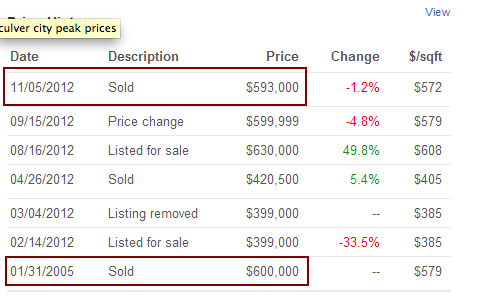 I'm willing to bet that there are also examples that contradict Dr. Housing Bubble's assertion (and I realize that Globe Ave. properties are a bit funky -- pushed up against the 405 as they are).

I was fortunate to grow up in CC where Johnnie's, The Rollerdrome, Keener's Ice Cream parlor and Culver Center were within walking or bike-riding distance.

Comment by Evlynne Braithwaite Householder on December 1, 2012 at 6:37pm

This is good news for Culver City.  You point out correctly this property is near the freeway.

The realtor who represented us in purchasing our Culver City home 14 years ago came by with the annual Holiday Banana Bread.  Yes, we have gotten it for every year since our first Christmas in our Clarkdale area home in 1998!

I inquired how the market was looking,he told me "that there is not enough inventory for an area like Culver City with all the parks and good schools and that it has to offer."

We are so fortunate to live in such a lovely community such as Culver City.