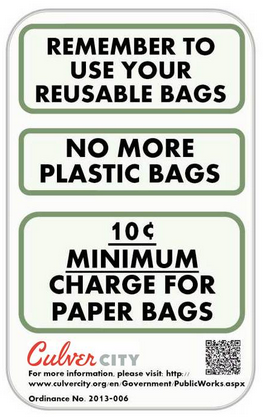 Culver City's Plastic Bag Ban -- adopted by the Culver City Council on May 28 -- goes into effect in large stores such as Vons/Pavillions, Ralphs, Trader Joes, and Target on December 28.

The ordinance bans the use of single-use plastic carryout bags and mandates a minimum charge of 10 cents for any single-use paper bags. Small produce bags will still be available.

Smaller stores in Culver City, such as convenience stores, have until June 14th, 2014, (a year from the ordinance's effective date) to comply.

Thanks for keeping us informed. I was wondering how extensive the "plastic bag ban" was. Somehow I thought it was statewide or something. They've started selling those reusable bags at Albertson's and Pavilions. Guess I'm gonna have to get me some pronto.