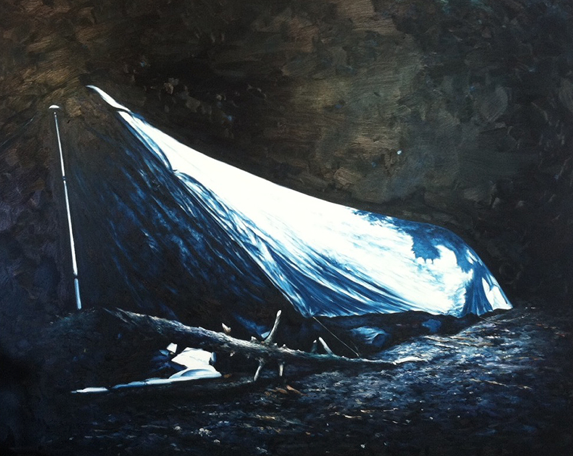 Art critic Christopher Knight recently gave a bit of a rave to the solo debut from artist Matt Lifson -- currently at Angels Gallery in Culver City. The show consist of five large paintings that all depict "the same enigmatic subject -- what appears to be a makeshift tent in the woods at night. But slight differences in tonality, lighting and paint-handling among the five generate unexpected responses."

Comparing the technique to Monet's repeated studies of hay stacks or a cathedral facade, Knight says, that here the effect is a bit more dark: "Grim, even inexplicably creepy, his blue-black 'Tent' paintings get you to scrutinize them like a detective at a crime scene."

As a cop would do, you try to create a narrative from pictorial fragments. Is that romantic moonlight illuminating the tent or a police helicopter's piercing searchlight? Does the tent belong to a vacationing camper or, given what appears to be its improvised nature, a homeless person? Is it shelter from an impending storm?

What's that jagged, sharp-edged but indecipherable whitish object just beneath the fallen tree limb? And speaking of the limb, why do its branches appear to have been stripped?

That's their strength: Lifson underscores the degree to which, encountering a picture, we project meanings onto it. These paintings are pregnant with possibilities, horrific or benign, which shift in and out of view across a wide range of emotional registers depending on a viewer's drifting thoughts. In today's picture-saturated world, no wonder things seem so daunting.

You can read the whole review HERE.