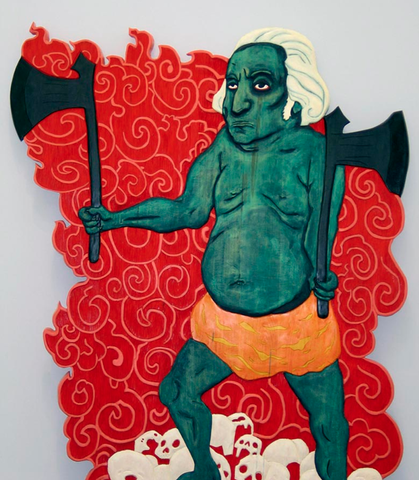 In Defense Of Ghosts, an exhibition of new work by Los Angeles artist Erin Cosgrove opens at the Angles Gallery this Saturday, September 8.  The opening reception is from 6 pm to 8 pm, and, as always, the event is free and open to the public. Angles Gallery is located at 2754 S La Cienega Blvd.

According to the gallery's release: "In Defense of Ghosts is an exhibition of new videos, sculpture and drawings. The Urfathers are five low-relief, polychrome wood sculptures depicting the Founding Fathers and Abraham Lincoln as violent, celestial deities. Each figure-Washington, Adams, Franklin, Jefferson, and Lincoln-is carved in a slurry of ancient and colonial styles, as the Ur- ("first," "oldest," or "primal") fathers of the nation. Ancient Assyrian bas-reliefs, Japanese Yokai, gothic grotesques, and Himalayan Buddhas are referenced in the brightly painted sculptures, which are standing on, or supported by, a cast of unfortunate mortals and downtrodden souls."

Two new videos, In Defense of Ghosts and The March of History, will be screened in an adjacent gallery.

Erin Cosgrove's work has been included in solo and group exhibitions nationally and internationally, including UCLA/Armand Hammer Museum of Art and Cultural Center and at the Museum of Modern Art in New York.