The Ballona Wetlands Land Trust was founded in 1994 with the mission of preserving the greater Ballona ecosystem from urban encroachment. The tireless work of hundreds of volunteers and the generosity of many donors across a coalition of organizations led to the successful transfer of property from a private development into a State ecological reserve in 2004. While the roughly 600 acres that were ultimately set aside for conservation purposes was far more than many thought possible, an environmental analysis identified the size of the reserve as a challenge for maintaining biodiversity. This is one of many reasons why the Land Trust is opposing the current development proposal by the Annenberg Foundation. The article below is a response by the Land Trust’s President, Walter Lamb, to THIS interview with the Foundation’s Executive Director, Leonard Aube, published in the Culver City Times on November 22nd.

Despite Leonard Aube’s expressed goal of “inspiring kids” and “educating people about responsible stewardship,” his misleading statements about the Annenberg Foundation’s proposal for the Ballona Wetlands send the wrong message to our kids and to adults alike about respect for nature, good governance, and honest dealing. The fundamental question at hand is whether one wealthy individual should be allowed to impose her personal whims on a natural public resource that was made possible by the work of hundreds of volunteers and acquired at great tax payer expense, simply because she is a friend and major campaign donor to the Governor.

The Annenberg Foundation has made many positive contributions to the social and cultural fabric of greater Los Angeles, and their idea for a new companion animal center would be welcome in just about any other part of the city. My wife and I have rescued and found homes for numerous homeless cats, and we are now teaching our young daughter about the value of companion animals and the importance of compassion. We are also teaching her the value of native wildlife, and we would not want her interpretive experience in the Ballona Wetlands to be determined by someone with such a shallow understanding of nature.

We want her to understand the difference between wildlife and pets, even as she understands the importance of both. We don’t want her to learn that our last natural open spaces can be developed as long as the displaced habitat is simply moved onto the roof. We want her to appreciate the wildlife that already uses Mr. Aube’s proposed construction site as habitat, and not to think that his “live critter” show of caged animals can substitute for seeing a Red-tailed Hawk soaring freely overhead, or a Great Blue Heron patiently stalking its next meal, or a Western Fence Lizard darting along a hiking trail. Just as importantly, we don’t want her to learn that it is OK to bend the truth and skirt the rules just to get something she really wants, or that the ambitions of people with money and power trump the dreams and hard work of other people. 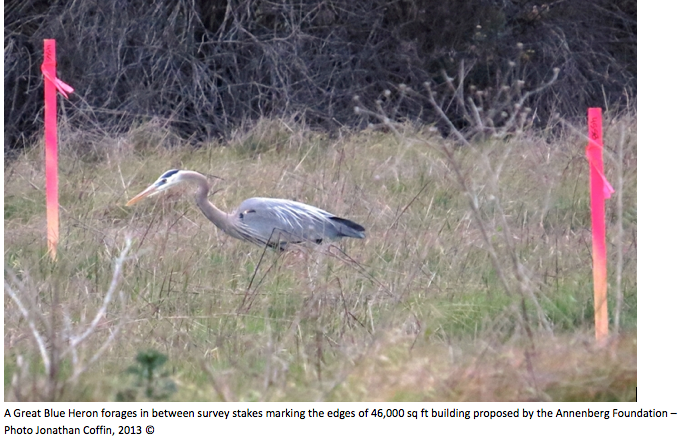 The Annenberg Foundation believes that its staff of lawyers, lobbyists and PR consultants can rewrite history, bend the science of ecology, and undo important legal protections for Ballona in pursuit of Wallis Annenberg’s personal agenda – the creation of a “Mayo Clinic” style center for domestic dogs and cats, surrounded by a campus of public open space, upon which she can inscribe her name. They hope Ms. Annenberg’s personal and financial relationship with the Governor will cause State employees to fall in line behind the project.

That strategy has been alarmingly effective to date. Dr. Shelley Luce is the Executive Director of the Santa Monica Bay Restoration Commission, one of the state agencies overseeing the larger restoration of the Ballona Wetlands. In January 2012 she called the inclusion of a companion animal adoption center a “deal-breaker.” In July 2012 she voiced her suspicion that the Department of Fish and Wildlife was “under pressure from on high” to continue with the project. Yet, in January 2013, she signed the Memorandum of Understanding (MOU) with the Department and Foundation, even though it clearly included the deal-breaking provisions for companion animal facilities. There is no record that her reversal was based on any scientific analysis or any consultation with her Scientific Advisory Committee, Governing Board, or any other group.

When Mr. Aube claims that the Foundation is “fulfilling the State’s vision,” he really means that the State has contorted its vision to accommodate the Foundation’s special interests. The Department of Fish and Wildlife assumed control of the parcel in question in July of 2004, and numerous needs analyses have been conducted since that time. Yet there is not a single record of the Department or other state agency expressing any desire for such a large structure or for facilities to house domestic pets until the Foundation pitched their project in September of 2011. In fact, during most of that time, from March 2006 to August 2011, the Foundation was attempting to build the “Wallis Annenberg Companion Animal Center” on public land in Rancho Palos Verdes. Despite spending $4.75 million on that project just during the permitting phase, the Foundation walked away when they realized that they could not bypass federal deed restrictions which prevented the land from being used for companion animal facilities. The 2010 comments of a National Park Service employee regarding the Rancho Palos Verdes proposal almost identically mirror a 2013 Los Angeles Times editorial criticizing the Foundation’s attempt to resurrect that proposal at Ballona:

"We do not deny that pet adoption services and education regarding our relationship with domestic animals are important social needs. The facility presented to provide those services simply does not belong on public parkland that is dedicated to public outdoor recreational use and that was obtained for the purpose of preserving open space. We suggest serious consideration of the alternative project site identified in the Draft EIR for facilities that serve purposes that do not qualify as public outdoor recreation." [bold added] Mr. Aube claims that this is not an obsession with the animal adoption element, but rather an “obsession with the world around us.” Unfortunately, when it comes to the natural ecology of Ballona, Mr. Aube and the Foundation seem oblivious the world around them. Mr. Aube and Ms. Annenberg should stop thinking of Ballona as a piece of real estate on which to construct their project, and learn to appreciate the wild animals and plants that exist there now.

To be clear, the parcel in question is indeed degraded and in need of thoughtful restoration. If the Foundation drops its stubborn insistence on locating their companion animal center there, they could help create a truly wonderful legacy that really would inspire kids and teach them about responsible stewardship of the environment. We have asked Ms. Annenberg to imagine school-aged children appreciating the plants and animals of Ballona in their natural settings, learning about the science of ecology in outdoor classrooms, and enjoying open skies and fresh air. We think that would be a far greater legacy at Ballona than the further degradation of the ecosystem, and it is an achievable goal if the Foundation starts caring about the things that they have repeatedly claimed to care about – access, education, and habitat improvement.

Mr. Aube’s acknowledgement that the companion animal components are “central to the foundation’s conception of the center,” at least shows that they have abandoned their cynical strategy of trying to hide or downplay that aspect of the plan. The aforementioned Dr. Luce complained in December of 2012 that a presentation by the Foundation included “NO MENTION of an animal adoption facility or domestic animal facility of any kind.” [her capitalization] The Department of Fish and Wildlife employee who oversees the ecological reserve acknowledged that some thought “the omission was deliberately misleading.” When Fish and Wildlife director Chuck Bonham briefed the Fish and Game Commission in February 2013, he made no mention of companion animals, despite the fact that the Commission would have to change the rules governing the reserve to accommodate the project. Mr. Aube himself, in a March 21st letter to the editor of the Argonaut newspaper, made no mention of the companion animal center. A page on the Foundation’s web page that purports to “set the record straight” makes no mention of companion animals. The Foundation’s motto is “Advancing Public Well-Being Through Improved Communication,” but they have fallen well short of that standard with regard to communicating to the public their true interest in Ballona.

Mr. Aube tries to make the enormous size of the proposed center seem reasonable by comparing it to the California Science Center, a full size museum where he formerly worked. It is a disingenuous comparison and is designed to distract from the fact that, at 46,000 square feet, their new center would be anywhere from 5 to 15 times larger than any nature center in Los Angeles County. The “bigger is better” approach is not the way to inspire and educate our kids about nature.

Mr. Aube condescendingly blames the overwhelming opposition to the Foundation’s proposal by environmental advocacy groups on “fears and anxieties of the unknown.” However, the groups opposing this project, including five different chapters of the Audubon Society and a score of other local organizations, know a great deal more about what belongs in an ecological reserve than Mr. Aube or the Annenberg Foundation. It is now up to the general public to show that is still has a pulse when it comes to protecting our natural resources against the special interests of the wealthy and politically connected. The Governor will only back off this project if enough people send him a clear message that using public conservation land to reward a friend and campaign donor is not politically viable, let alone ethical.

Comment by Rick P. on December 3, 2013 at 6:26am
The article is spot on, it is not possible to be any more clear about what is truly happening (the deception) here. If Annenberg were allowed to build on the Ballona wetlands it would be a complete travesty to nature, prove that the public is not paying attention to what is going on in their back yard, and last and most importantly, prove that money and power trumps all, even our local government. ~Rick