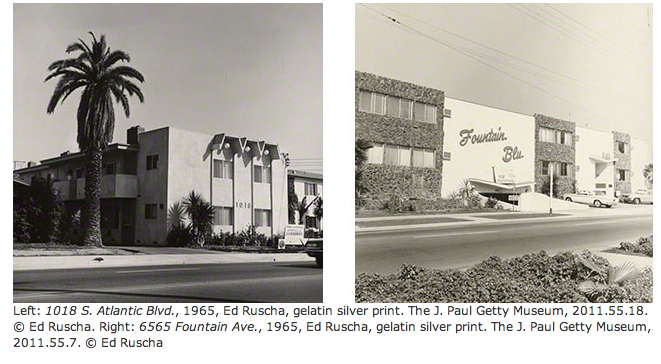 The J. Paul Getty Museum is currently offering an exhibition of the photography of Culver City resident Ed Ruscha, including the images from some of the 16 photo books Ruscha produced between 1963 and 1978, including Twentysix Gasoline Stations (1963), Some Los Angeles Apartments (1965), Every Building on the Sunset Strip (1966) and Pacific Coast Highway (1974).

It's just great stuff, and I highly recommend you take the trip up the hill to check it out. Ruscha's images manage to be both matter-of-fact and very droll, both iconic (with those flat-lit exteriors framed by palm trees) and questioning. The framing emphasizes both the bold graphic qualities of the structures and their isolation.

For Twentysix Gasoline Stations, Ruscha photographed gas stations along Route 66 during road trips between Los Angeles and his hometown of Oklahoma City. Here are a couple of the images, offered by the Getty website.

In addition to the images that appeared in the books, the exhibit "includes variant prints, a contact sheet, and unpublished images, providing insight into the process by which Ruscha identified his subjects, employed a documentary style to record them, and made subsequent editing decisions."

The exhibit runs through September 29.