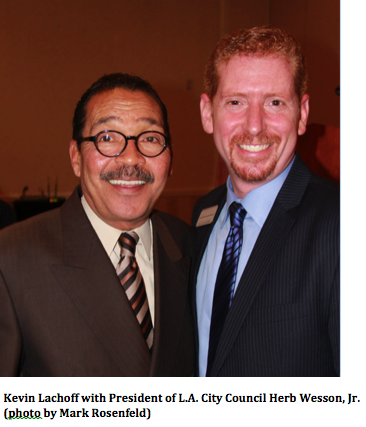 The Oath of the officers was given by former Speaker of the California State Assembly and current President of the Los Angeles City Council, Herb Wesson Jr., who was in attendance with his wife, Fabian. Mr. Wesson provided a number of humorous but heartfelt acknowledgments to some of the various members of the audience, and gave significant credit to his success to the early support he'd received over the years from Culver City, a springboard that has carried him far through his political career. After Mr. Wesson had administered the Oath and concluded, Mr. Weissman welcomed the newly installed Chair, Kevin Lachoff, to the podium for a few remarks. Mr. Lachoff expressed his enthusiasm for the upcoming year, and thanked both the board members for their time and dedication, and Steve Rose and Barbara Brody for the tireless effort to keep the Chamber of Commerce running strong. He called attention to his father, David Lachoff, and Mother-in-Law, Culver City Historian Julie Lugo Cerra, and wife, all in attendance, and gave appreciation to all of those friends and business and community advocates in the audience that he credited amongst those who help make Culver City such a great place to live, work, shop, dine and play.

The afternoon event concluded with Scott Bowling of the Exceptional Children's Foundation standing in to deliver Geoff Maleman's Humor of the Day, ending the overall light-hearted event on an even higher note.