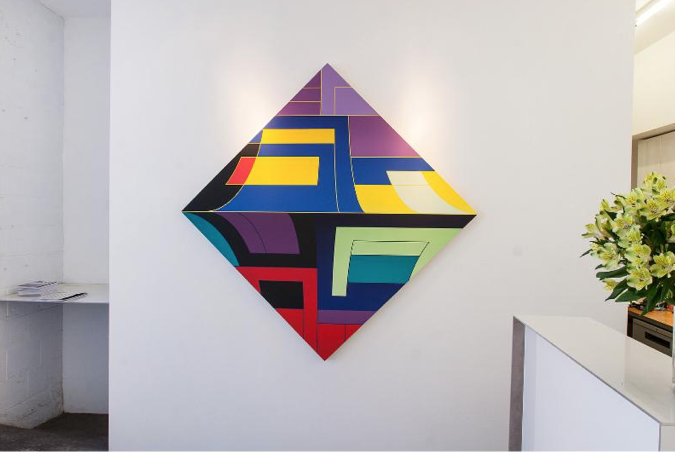 ...Burke treats Op as a springboard into something bigger and bolder and more muscular than it was the first time around. A great deal of oomph, and even more delicacy, are palpable in "Dutch Jailbreak," his rollicking exhibition of eight new paintings at Western Project.

Each is a diamond-shaped panel that the New York artist has taped and painted with an airbrush. The borders between Burke's screaming colors are razor sharp. Right angles combine with graceful curves to create the illusion that each flat panel is a flying wedge that rises off the wall, like a pair of radical skateboard ramps, their shared crest dividing Burke's compositions right down the middle, either top to bottom or left to right.

Subtle shifts in Burke's palette make the illusion work. Its physical impact, which is immediate and undeniable, quickly gives way to great subtlety. When push comes to shove, Burke is a colorist. His hyper-saturated tertiaries are extraordinarily synthetic, if not downright unnatural...