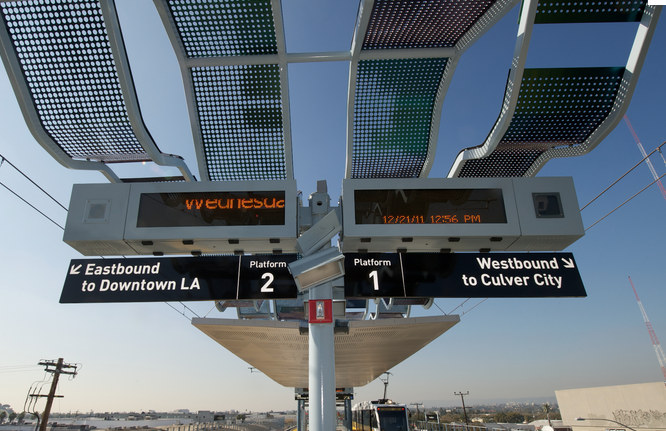 What do you think of the design of the stations on the new Expo Line, open now to La Cienega and scheduled to come to Culver City at the end of June? In an article both grumpy and trenchant, the Los Angeles Time's Architecture critic Christopher Hawthorne describes the stations as "aggresively banal."

"The stations seemingly want to disappear into the cityscape and at the same time assert a Big Metaphorical Idea about what public transit means for Los Angeles," Hawthorne says. "And in trying to do both, of course, they do neither." He goes on to say:

Designed primarily by Roland Genick...the new stations are topped by undulating light-blue canopies of perforated metal panels that are not only dated — bringing a public-art project from the early 1990s to mind — but provide almost no shade or rain protection. Or solar power, for that matter, though from certain angles the stations look a bit like they're covered with photovoltaic panels.

The canopies are meant to suggest a woven pattern, symbolic of the way new Metro routes, and the Expo Line in particular, are knitting parts of the city together....  In concept, the weaving idea is perfectly inoffensive. In execution, it has grown into a sort of ornamental kudzu. It overwhelms the rest of the station architecture, which is generally understated, even minimalist...

They do miss the point, I think. The Expo Line is powerful enough. At its west end, the elevated stations are incredible new landmarks. "Bitchin'" stations would be besides the point.