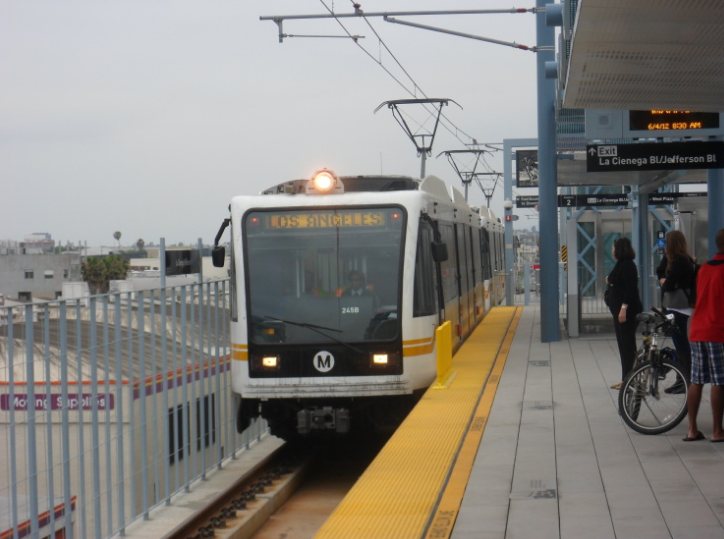 Angelenos who live near an Exposition Light Rail station dramatically reduced the number of miles they drove and tripled their rail ridership after the opening of the new rail line last year, a new USC study released Monday shows.

Residents living within a half-mile of the new station traveled 10 to 12 fewer miles daily by car – a 40 percent decrease – after the new rail line opened, according to the study.

That same group also tripled their rate of rail travel, from an average of one daily rail trip per household before the Expo Line opened to almost three daily household rail trips after it opened, according to the report.

“Los Angeles has made a large commitment to rail transit, and this study is the best evidence to date that persons near rail lines are driving less,” said lead author Marlon Boarnet, a professor with the USC Price School of Public Policy. “People have been wondering if anyone will change their travel habits in the wake of more rail transit, and this says the answer is clearly yes.”

The findings represent the first experimental study of the effects of a new rail line in Los Angeles. The study’s authors followed more than 200 households over seven-day periods in fall 2011, before the Expo Line’s initial opening, and after the rail line opened in fall 2012.

The households were split into two groups: people who live within a half-mile of an Expo Line station, and those who live farther than that distance from a station.

The researchers asked participants to track their travel by recording daily odometer readings for all vehicles and logging trips by mode of travel. About half of the participants also carried a GPS device and accelerometer to measure their travel and physical activity.

“This is the first before-after evaluation of a major rail transit line in Los Angeles,” said study co-author Doug Houston, assistant professor of Planning, Policy & Design at the University of California, Irvine. “The results suggest that regional plans to target household and job growth towards dense, high quality transit areas are headed in the right direction and could be associated with sizeable reductions in vehicle-related air pollution.”

Among the report’s findings:

• Residents living near Expo Line stations produced about 30 percent less carbon emissions from their vehicles after the opening of the rail line than did residents living farther from the stations.

• Those living near the Expo Line stations who were the least physically active before the line’s opening increased their moderate or vigorous physical activity by 8 to 10 minutes per day, as compared to those living farther away.

In 2008, Los Angeles residents approved Measure R, which is projected to raise $40 billion over the next 30 years to fund more than a dozen rail and rapid transit projects. The first phase of the Expo Line opened in April and June 2012 connecting downtown to Culver City and is currently being extended to Santa Monica.

Average daily ridership on the Expo Line numbered 27,603 people in October, up from 21,382 a year earlier, according to Metro.

You can read the whole study HERE.