Where Am I in Culver City? 50 Solution: Hayden Tract Cactus Garden 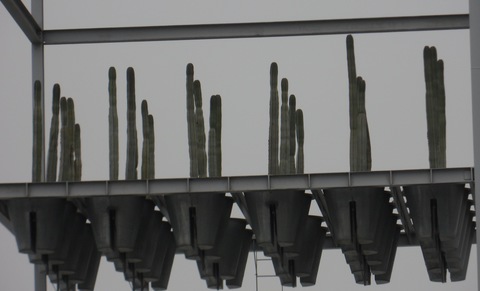 Culver City Times member Dylan Gottlieb correctly identified it as being on Hayden Avenue, and indeed it's located at 3585 Hayden. The startling piece -- called "Cactus Tower" and installed in 2011 -- is part of architect Eric Owen Moss' fantastical conception for the Hayden tract.
Here's what Conjunctive Points' mastermind Eric Owen Moss himself has to say about the installation: “The silver steel frame was originally another building that used to hold an industrial press. It’s drought tolerant and maintenance free—an advocacy of green in the sky.” There are some really amazing images of the tower HERE, a link that Culver City Times member Luis Lopez shared in the original post.

The Eric Owen Moss Architects site more details about the tower, its origins, utility and meaning. I'm not sure why their language is so stilted (and in the present tense), but do your best with it. It's from the horse's mouth:

"Samantha Hart, owner of Foundation Content, a Chicago-based media, production, and graphic design company expands to Los Angeles, and rents a 30,000 square foot warehouse. The building was originally used for light manufacturing, and was constructed in the 1940’s. A large steel frame, enclosed with corrugated metal, 50 feet high, located just outside the warehouse, once housed an industrial press.

"The old industrial press tower is stripped, revealing a ramshackle steel support structure, and a supporting concrete block wall.  The intention is to use the existing structure to position an outdoor meeting and gathering area. A new “green structure” is installed mid-way up the tower, providing a canopy/pavilion that defines a space for outdoor work and relaxation.  This new structure is composed of 28 steel pots, each holding sufficient earth for a single, Mexican Fence Post Cactus (Lemaireocereus Marginatus).  The pots are positioned in six parallel lines of pots, running east-west. A ladder leading to the cacti is provided for maintenance.   In the center of the Cactus Tower, two pots are omitted from the sequence to allow for the penetration of the afternoon sun to the meeting area floor.

"As a consequence of its height, the Cactus Tower is seen from long distance, a symbol of drought tolerant greenery on the West Los Angeles skyline.  The Cactus Tower is the result of combining an environmental advocacy position, an outdoor space, and a new truss typology. The Cactus Tower will serve as a logo and a conceptual model for the sort of production work to be delivered by Foundation Content.

"A large new, multi-purpose production studio, constructed of metal studs and drywall, tightly wrapped with acoustic fabric is designed and constructed within the 30,000 square foot shell.  The production facility is surrounded by a variety of open and closed conference facilities, private offices, post-production venues, and eating and relaxation accommodations.  Three glass roll up doors are installed on the perimeter walls of the existing concrete shell, opening to the Cactus Tower just outside."