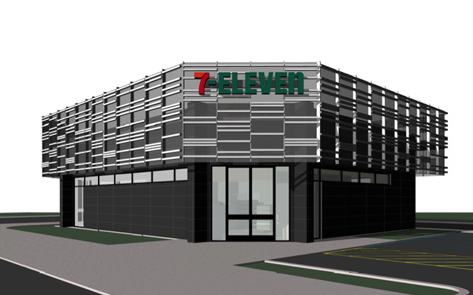 This Monday, the Culver City Council voted 4-to-1 to reject an appeal that would have prevented the building of a 7-Eleven convenience store at Sepulveda and Braddock. This wasn't much of a surprise, although no one can say that they didn't give the appeal due process: the meeting lasted until about 1:00 AM.

What was more of a surprise was that somewhere along the line, the Culver City Planning Commission decided that a traditionally designed 7-Eleven wouldn't do, so what we're going to get is something approximating the Death Star-ish design shown here. Interesting.

Here's how the agenda document described how we got here: "The Planning Commission determined that it was necessary to avoid the standard company store design and encouraged the Project architect to produce a more modern architectural style, unique to the 7-Eleven franchise and the neighborhood. The building facade incorporates varied building materials including an aluminum screen mesh that accentuates the building form."

I, for one, welcome our new metal bug overlords. No, seriously, I love that the planning commission is deciding things with an eye to style. Better-looking buildings can only enrich our city and promote it further as a destination for investors and as a pleasant home for residents.

I'm glad to hear to you say that, Chris. I'm all for unique design, but from the drawing and the scale we're talking about, i was kind of worrying that it would end up looking a little metal bug.

As much as I don't like the idea of another 7-11 in Culver City, from what I read, a fast food spot, a bank, or another gas station were the only other options for this land. And at least this won't be just another generic-looking 7-11. I appreciate the fact that the Planning Commission requested a unique design.